The balloon campaign was not the first time the Japanese attacked the American mainland. It was, in fact, the fourth attack. In February 1942, even before the Doolittle raid, Japanese submarine I-17 shelled an oil field up the beach from Santa Barbara (CA) and damaged a pump house.

et ceci :
" `The Battle of Los Angeles was a myth; the Japaneses did not send planes over that city the night of Feb 2-25, 1942, a Japanese navy spokesman told the Associated Press today.

The question was put because the Fourth Air Force at San Francisco on October 28th said that planes, possibly Japanese, were overhead that night. Lt. Gen. John L. DeWitt, former commander of the Western Defense Command at San Francisco, was quoted, "It is my belief that those planes were launched from submarines somewhere close to the shore under our detectors."

Capt. Omae of the Japanese navy said, however, that a plane was launched from a submarine and sent over the Southern Oregon coast on Feb. 9, 1942, "to attack military installations, but the lone pilot was unable to discover any. Another purpose was to keep Americans worried over coastal attacks and force them to keep many planes at home. This would cut down the air strength America could send overseas." Omae said the reason the Oregon coast was selected was not indicated in navy files.

The submarine, which shelled Ft. Stevens, Oregon, near the mouth of the Columbia River, approached its objective by remaining submerged during the day and surfacing late at night. Omae said the submarine commander had a full set of plans of Ft. Stevens and his objective was to destroy the military installations.

The submarine which shelled the Goleta oil filed near Santa Barbara, CA., early in 1942, also sought military installations, and to nail down American forces in the United States. That attack was made so the Japanese people could be told that one of their submarines easily reached the United States coast. "When the submarine commander failed to find military installations he shelled oil property," Omae said.`

If Omae was recounting their successes, I don't see why he wouldn't mention fire balloons. That is unless of course he wasn't familiar with their launch. If that's your argument I'd then counter that it still couldn't be the case because the first launch was two years later in '44. Also the LA Times picture strongly suggests the "balloon" was elliptical along the horizontal. Whereas we can assume a partially deflated balloon would be elliptical along the vertical axis. The general shapes don't match up. That aside, also take in to account that the balloon was reported to be incandescent according to a number of people, including, Halbert P. Gillette of San Marino who wrote a Letters to The Times, L.A.T (pp. 81, Sword, Terrenz (2002). Battle of Los Angeles 1942: The Mystery Air Raid, 60th Anniversary Edition. New Bruncswick, NJ: Global Communications. ISBN N/A.)


"Wednesday morning a friend told me that he had witnessed the first "dog-fight" between airplanes over America. Later it turned out that what he had seen was a "dog-less dog-fight," for no enemy airplanes had been seen or even heard, and that what looked like a balloon had been spotted by searchlights and fired upon.

The photograph in Thursday's ''Times'' shows the alleged balloon clearly, illuminated by nine converging searchlight beams, and with half a dozen blobs of light from bursting anti-aircraft shells near it. This "balloon" has a nearly hemispherical top and possibly a similar base. That it was not a balloon seems probable because the escape of a no balloon has been reported, as well as because it failed to collapse under intense and apparently accurate shellfire. What was it then?

The answer is that it was probably an approximately globular cloud of exceptional character. There is a well-known, though rare, meteorological phenomenon known as a fireball. Occasionally such a luminous ball drops out of a thundercloud and drifts away looking like an incandescent balloon. The astonishing features about a fireball are two, first its almost perfect sphericity, and second its incandescent."


A careful study of the evidence suggests that meteorological balloons — known to have been released over Los Angeles — may well have caused the initial alarm. This theory is supported by the fact that anti-aircraft artillery units were officially criticized for having wasted ammunition on targets which moved too slowly to have been airplanes. After the firing started, careful observation was difficult because of drifting smoke from shell bursts. The acting commander of the anti-aircraft artillery brigade in the area testified that he had first been convinced that he had seen fifteen planes in the air, but had quickly decided that he was seeing smoke. Competent correspondents like Ernie Pyle and Bill Henry witnessed the shooting and wrote that they were never able to make out an airplane.

February 23, 1942
A Japanese submarine fired 13 shells at the Bankline Refinery at Goleta in Southern California shortly after 7 p.m. One oil well was damaged. The Civilian Defense control center in San Francisco's City Hall was activiated when the news arrived from Goleta of the enemy attack. Police Chief Charles W. Dullea put all officers on standby for emergency duty.


February 24, 1942
All of northern California was declared a "strategic area" and Axis aliens were subject to a 9 p.m. curfew. In addition, enemy aliens must evacuate areas around Army posts, airfields and vital utilities. Lt. Gen. DeWitt will lay out many additional areas from which aliens, and some citizens, will be removed. The first 250 enemy aliens, mostly Japanese, left San Francisco for a camp at Bismarck, North Dakota.

February 25, 1942
Several thousand anti-aircraft rounds were fired by the Army at an unidentified target near Santa Monica. It was later determined to be a lost weather balloon. It became known as "The Battle of Los Angeles.

"That it was not a balloon seems probable - What was it then?" -article de Marcassite- 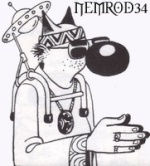 The Battle of L.A in 1942 was a Nazi Haunebu III UFO? New Enchanced Photos.
http://www.abovetopsecret.com/forum/thread543760/pg1


Reporter: Wasn’t there a naval battle during the war in which there was a great engagement fought against an inversion of radar?

This refers to an incident during the summer of 1943 in which a Navy task force fired a thousand rounds at objects that had appeared on radar. Lookouts reported seeing flares from the Japanese navy. Vice Admiral Robert C. Giffen had commanded the American forces in what he described as a battle of the blips. In other words, Giffen was suggesting that the Navy had fired on targets that were a result of temperature inversions and not on something real, that is Japanese, that was attempting to invade one of the Aleutian Islands. James said that he understood that this had happened.